Can You Be More Confident About Your Hair in an Interview? Find Out More In My Video! 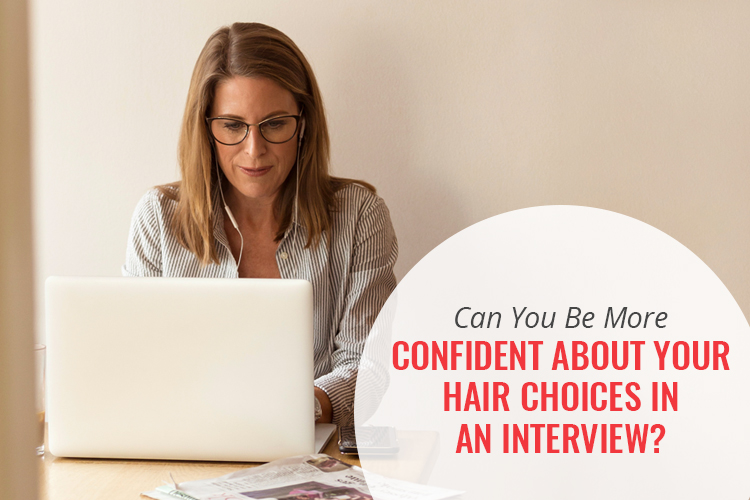 How much do you worry about your look before you have a job interview?

Over my 20 years as an interview coach, I’ve helped people face countless issues. I’ve given them advice about questions they might be asked, or how to best highlight things in the resume, or simply talking to them about their insecurities. But there is one very important aspect of an interview that can trip just about everyone up, no matter how “prepared” you are: your look.

Well, I’m not a hairstylist, but after being on both sides of the interview table for so many years, I have a few clues about how to put your best foot forward with the way you look! Here are two stories about how I helped my clients become more comfortable with their hair in an interview setting:

Age might be just a number, but it can also be a “look.”

I once worked with a woman in her early 30’s, but looked much, much younger. While this might be considered a blessing in most respects, for her, it was a bit of a curse. She told me that, while she held a big job at her company, she felt her look was a major reason she didn’t get the respect she thought she deserved.

She asked me what I thought and I immediately zoomed in on her hair. She had very pretty, shoulder-length hair. We talked about some of the different things she might be able to do with it to make herself look a bit older.

While she was adamant that she didn’t want to spend too much time on her hair, we went to the ladies’ room anyway and looked in the mirror. I simply took her hair, and pulled it back and down, as if she was wearing a pretty and fairly large barrette at her neck. And voila! She looked totally different! She admitted to me that she hadn’t changed her hairstyle since graduating from college. With this minor change to her hair style, she now looked more like a woman, and less like a girl. And with that look, surprise, she suddenly had more confidence!

Finding your first grey hair can have a huge impact on your self-confidence. And it doesn’t get any better when most of your hairs are grey, or in the case of this story, white.

I was once coaching a man who was very insecure about his age. He was in his 50’s, and despite his extensive job experience, he was afraid that no one would want to hire him.

I asked if he had any specific experiences in that past that contributed to feeling too old to get hired. He said yes, one time he was sitting in a lobby, waiting to be escorted into the interview. The receptionist was young and fairly short. He was tall. As she walked him into the office, he noticed that she was looking closely at his hair. It made him very uncomfortable, as he took it as a sign that she thought he was too old for the job.

In response, I said that maybe it didn’t have anything to do with his age. He had beautiful white hair, not the more typical grey that most other men have in their 50s. It made him look handsome and a little unique. I suggested that maybe he was reading something into her glance that wasn’t there, simply because of his insecurity. In fact, she might have been checking him out! He was surprised at that, as it was a new perspective for him.

So much of our self-esteem is tied up in our “look.” If you;re worried about your appearance or the way your hair in an interview looks, it can have a major impact on our self-confidence. But when you are comfort with the way you look, you’re going to be heading into interviews without a care in the world. Well, at least not about your hair!

If there are other reasons why you feel nervous or unprepared going into an interview, I can help! I have been doing interview coaching for 20 years, helping people build confidence in themselves. If you think I can help you, just go to the Tools for Transition website and schedule a call. There is NO CHARGE for an initial consultation.

I hope to hear from you!