Have Cultural Issues Sabotaged your Interview? [Watch My Video] 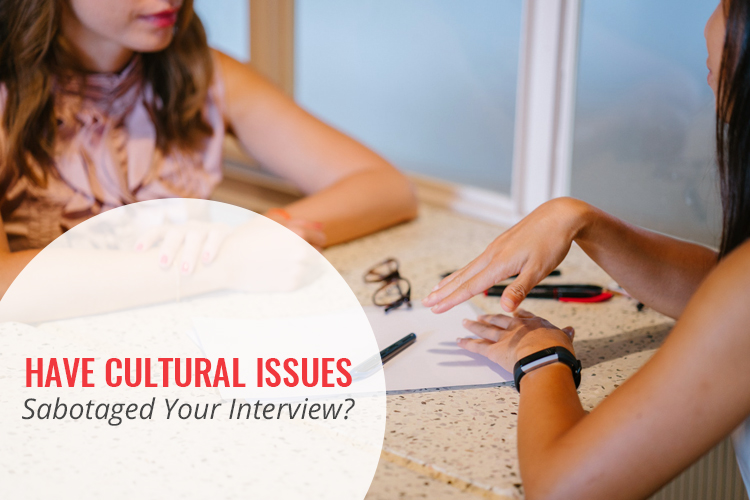 There is a real mix of cultures here in the San Francisco Bay Area. Many of the people living in the area were born and raised in another country. This mix of cultures can sometimes result in different types of “proper” etiquette, putting people unexpectedly at odds, even in professional situations.

In my time as a recruiter, resume writer, and career & interview coach, I’ve encountered many situations where the difference in cultural norms between people led to awkward encounters.

Back when I was a recruiter, people would come to my office. Once, when the receptionist let me know one of my appointments was waiting in the lobby, I ran into an awkward cultural situation. In the lobby, I approached the man who was waiting and reached out to shake his hand. The gentleman instantly became very stiff and uncomfortable. But once we went to the interview room, his demeanor shifted, and he was great!

At the end of our meeting, I mentioned that he seemed so different in each place. He replied that he was from Pakistan, and in his culture, men are not supposed to shake hands with women who are not part of their family. I asked him how that breach of etiquette could be avoided, and he responded that I would have understood not to extend my own hand, thus putting us both in an awkward situation.

Another time, a hiring manager came to my office to interview multiple candidates for the job. He told me that he absolutely would not hire one of the women because she kept saying “Honey,” “Sweetheart,” “Darling,” and other endearing phrases during the interview. He said it was inappropriate. Having interviewed thousands of people from across the United States, I recognized that she was from the Deep South, and that was the way people talk there. She just grew up that way.

Unfortunately, I don’t think there is a clear way to avoid these situations. You just have to be aware that not all cultures you encounter in your job search will be the same. When I extended my arm to shake hands, it was proper etiquette in my American culture, but a breach of etiquette in his, particularly for two adults in a business setting.

While these types of situations are occasionally unavoidable, they can be navigated to a place of mutual understanding. As an interview coach, this is the type of guidance I can give my clients to prepare for upcoming interviews. You can schedule a NO CHARGE consultation and I can’t wait to help you land the career of your dreams!