How Four Jobs Can Become One on a Resume 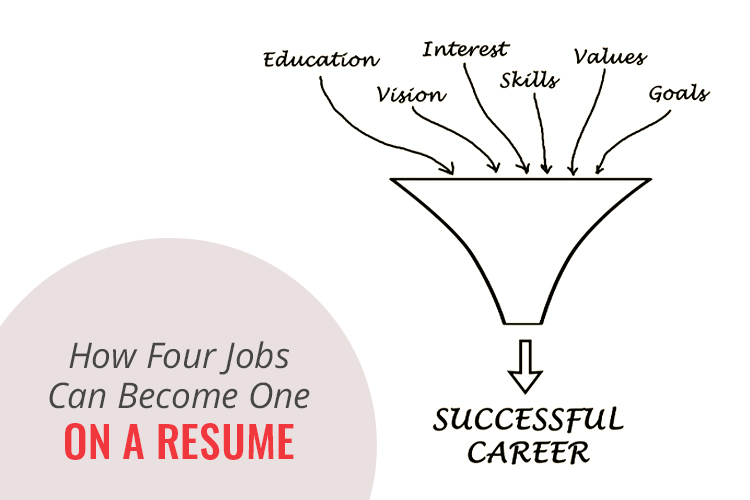 One time, I had a coaching client who had several jobs with very short tenures. He was very concerned that anyone looking at his resume would think he was unreliable based on his work history.

His resume showed that he had been the General Manager at four different hotels over the last few years. After reviewing it, I said I totally agreed with him. At first glance, he looked flaky and unstable, but there was a lot more going on!

When we talked more about what he did, it turned out the last four jobs as General Manager were with the same high-end hotel/resort chain. One of them was even in Singapore. He was a little embarrassed to tell me he was really good at what he did. He was respected as someone who could turn around a problematic hotel pretty quickly. With his knowledge of the industry, he would assess problems right away and rapidly implement solutions. So, when you dug into those “four jobs” a little bit, you saw that they were actually a measure of his success!

I realized that there was another way that he could think about his career on paper. What if we grouped those four jobs on his resume under the general umbrella of the hotel chain itself? Then we could reposition his four “jobs” that made him look unstable into four “assignments” that made him look like a real “turnaround guy.”

When he started to think about his experience as a single body of work (four assignments, one employer), he relaxed and said he felt more confident talking about his career in interviews. It gave him a different framework to speak about his very successful track record.

It’s the exact same information but laid out in a way that highlights his abilities rather than makes him appear to be flaky. Sometimes, it’s all in the formatting!

So, do you have any specific problems in your career, and you aren’t sure how to present them on your resume? If so, please schedule a free consultation to discuss. There is always a way to position your past jobs in a positive light!