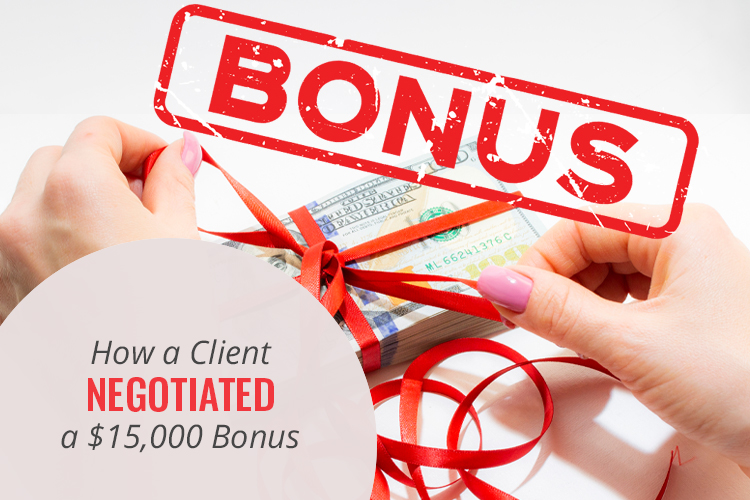 Can you imagine negotiating a $15,000 bonus when you didn’t expect a dime? I once had a client who was able to do just that!

A national company hired him to turn around operations at a site in their San Francisco-area location. It would be a challenge, but he was an experienced and talented General Manager. It was a risk to relocate his family because he had four kids, but he had confidence in his abilities, and it was a great opportunity.

He assessed the situation, then told the company what he planned to do to make the site profitable. They set ambitious goals, and if he achieved them, he would earn himself a nice bonus!

But then, some unexpected circumstances out of his control slowed down his efforts. He eventually met the required goals, but it took longer than expected.

He was frustrated because he had been counting on the bonus, but nothing was happening.

Back when I was a recruiter, I learned that everything is negotiable. He needed a strategy to get the bonus he deserved. I asked if he had a company truck because he had a long commute. No, he drove his own car. Ah, an opening gambit!

He decided the District Manager was the right person to approach about the possibility of a company truck. They liked the idea but were not able to get anyone at the corporate office to approve it.

Discouraging, to say the least.

Then my client and I strategized on how he could ask for a $15,000 bonus since they rejected his first suggestion. It would be an acknowledgment of his good work, plus enough to make a difference for his family.

It worked! He got the $15,000, along with formal recognition from the company that he had done an excellent job on his assignment.

So remember, everything is negotiable! If you have some issues you think you can negotiate with your current new employer (or maybe you have landed a new job and want to negotiate a great deal), please feel free to schedule a free call with me! Let’s get you what you deserve from your employer!