3 Examples of Not Revealing Something on LinkedIn 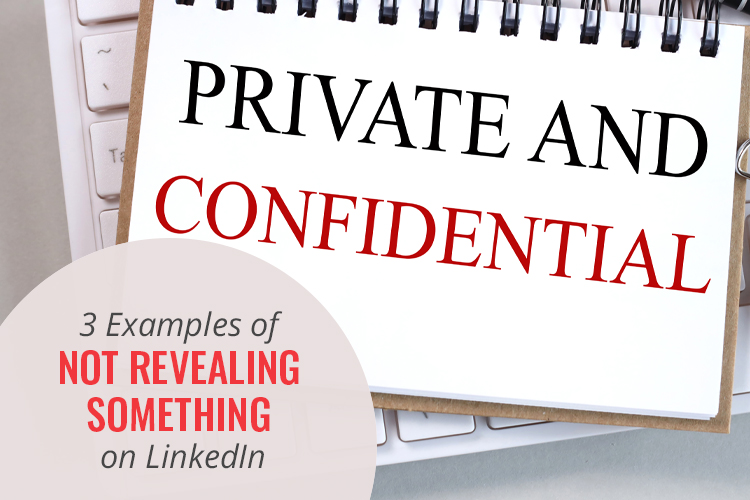 Do you ever wonder if you should reveal something personal about yourself on LinkedIn? How do you decide?

LinkedIn has unambiguous policies in place to make sure the platform is safe for everyone. They take personal safety very seriously and so occasionally limit the amount of personal information that you can share on the platform. That doesn’t mean you can’t share parts of your past with potential readers, but there are circumstances that might not be black and white on what to reveal. For example:

I once had a client who played a musical instrument in a community band. We originally included a mention of that in the “About” section of her profile. But then she had to stop playing because of health issues. We decided to remove the mention because she didn’t want anyone to bring it up. What if the interviewer also played in a community band and wanted to talk about it? It would have put her in a potentially awkward situation.

Another client had cancer when he was 13 years old. He was healthy now and long put it behind him. He had a choice. If he revealed that he had cancer as a child, it could be an excellent example of overcoming adversity, learning how to accept help, etc. It definitely shaped who he is as an adult. But he decided in the end not to disclose. It was just too pers

One of my clients moved to the U.S from another country. I noticed there was a gap of several years between his last two jobs. I asked him why. It turns out that he and his daughter had been in a concentration camp! What?!

I would never have guessed by anything I observed in our interactions. We decided not to acknowledge that gap of time on either his resume or LinkedIn profile. We assumed that the reader would come to their own conclusions about why they immigrated to this country.

So, it is totally up to you what you decide for sensitive issues like these. Where is your comfort level? How do you want to be perceived? Including this kind of personal information on your resume or LinkedIn profile can profoundly impact how someone interacts with you in an interview.

These are the types of topics I have discussed with clients as their career coach. If you have some things you are undecided about revealing on your profile or resume, I can help you think it through. There is no charge for a free consultation!