4 Reasons How Being Persistent Got Her the Job 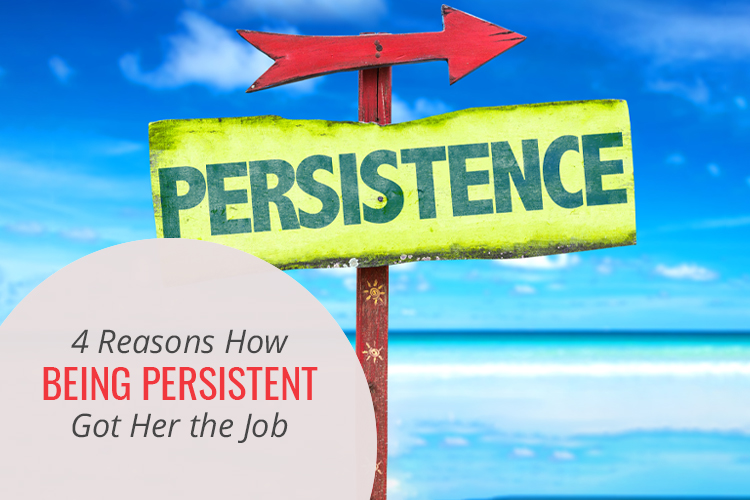 Have you ever had to be really persistent to get the job you want? That might be one of the prime reasons you ended up succeeding in your job hunt. Persistence is not an easy skill to acquire.

One of my clients had a 20-year tenure with one company when suddenly her job was eliminated. She was an accountant with a specialty in “international consolidation.” Only large international companies have someone in that type of role.

It was extremely difficult both personally and professionally to find a new job after feeling secure in her position for the last two decades. To top it off, she was introverted and not a huge fan of change.
But she had one quality that made the year tolerable. She was persistent. What does that mean?

1) She had to continue to believe in herself

She never doubted that she was competent, experienced, and had a lot to offer her next employer. She had to be persistent and not let any self-doubt get in the way.

Every day she pushed herself to continue on in the pursuit of a new job.

3) She had to connect with people around her who were supportive.

She had to be persistent in keeping ties with them, even though she was slightly embarrassed it was taking so long to get a job. She also sought after a career coach to help her get through this transition.

4) She had to be open to possible opportunities.

Because she had worked with one company for almost her whole career, it seemed like a whole new world had been opened. The amount of various opportunities was overwhelming. She had to be persistent in keeping a growth mindset in which she believed she could learn any new job!

Did she get a new job?

She went from a large, global conglomerate – to a nonprofit for a local animal shelter. As fate would have it, her children had even previously adopted two lizards from that same shelter!

A year is a long time to be looking for a new job for anyone, especially someone as experienced as my client. She completely impressed me by staying persistent and keeping herself on track.

If you are discouraged because your job search is taking longer than expected, contact me for an absolutely FREE consultation. Let’s talk about how to find your next job.