Is Your Job Title A Problem? 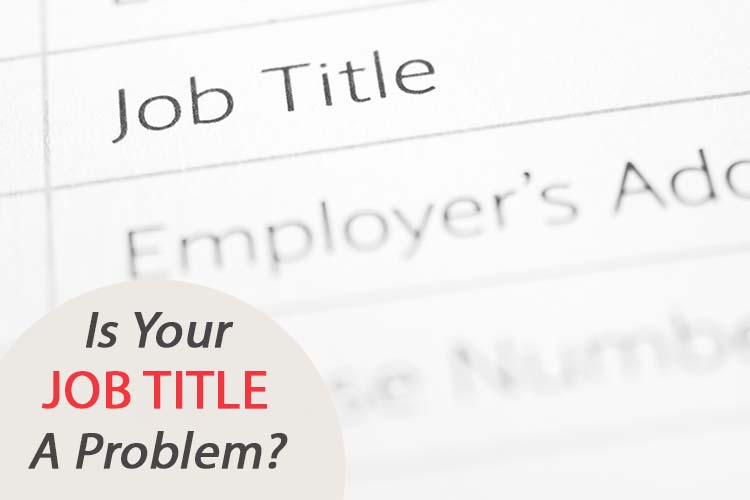 Not everyone realizes that negotiations for a job offer can include the JOB TITLE, not just the salary.

The job titles themselves are important for multiple reasons.

✓ They establish who you are for people you are working with OUTSIDE of the company. Are you the Vice President of Sales, or are you a Regional Sales Representative?

✓ They also set up your relationships WITHIN the company. You need credibility with your colleagues and staff if you are a manager. This is one way to make that happen.

✓ Business cards are also a way to establish how you perceive yourself. If you move from Manager to Director to Vice President, it might take some time to really “OWN” those differences as an indicator about of career progression.

So how can this be a problem?

✓ I had a client whose job title was “cost accountant,” but his actual duties were those for a staff accountant. HIS RESPONSIBILITIES HAD MORPHED OVER TIME. He didn’t realize that he should work with HR so that the title actually matched what he did.

✓ When I was a recruiter, I worked with a hiring manager whose title was Chief Financial Officer.  He was then laid off, so he became my client as a resume writer and coach.

✓ Was his JOB TITLE THE PROBLEM? The company thought they were doing him a favor by moving him from Controller to Chief Financial Officer, which is traditionally a higher-level job. But it turned out to be an issue.

I could not do that because I started work with him as Chief Financial Officer, not Controller. But once he essentially lied on his resume to say he was a Controller, he got hired right away.

✓ If you are applying for a NEWLY CREATED JOB, whoever put that together probably already assigned a job title. But there might be a gap between that title vs. how you understand the job. That can set up a problem of expectations between you and your new boss, so it is something you want to negotiate.

✓ I worked with another client who was hired as a senior executive. She had been at the company for several weeks, and HR had not yet arranged for her to have BUSINESS CARDS. I told her that was a big problem and she would be embarrassed at some point.

She was a senior executive, and not having business cards could undermine her credibility. I told her she needed to go to HR immediately to find out what was the holdup.  She needed to insist that the business cards be provided right away.

So just be aware of your job title when you accept a new position and as your work progresses over time. Sometimes there is nothing you can really negotiate if you are with a big company.  But if you work with a mid-size or small company, that opportunity might exist.

If you want to negotiate your salary and a job title, you can schedule a call for a free consultation.  Go to this link and it will take you to my scheduler. I have been involved with job-related negotiations for 22 years, so I do have a lot of experience.