Is It Your Co-Workers, Your Clients Or Your Job That Are Making You Unhappy? 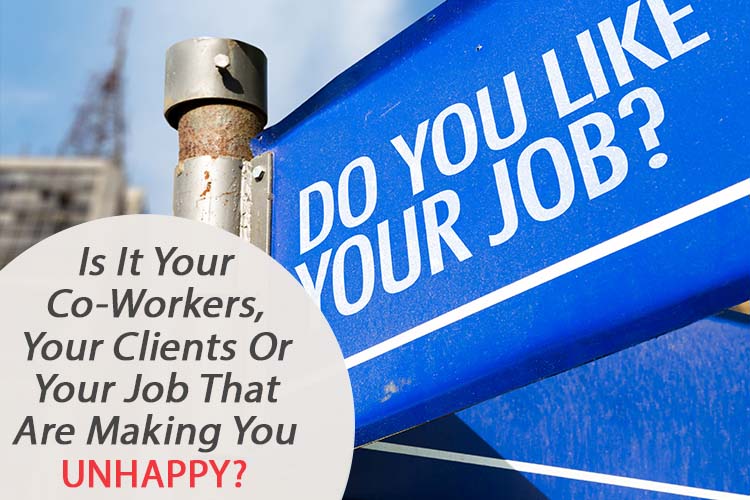 If you are dissatisfied with your work, sometimes the possible reasons are jumbled up in your emotions. It is hard to separate things out to find the source of the problems.

Do you like to be around your co-workers? Is it a good team? Are your clients easy to work with?
What about the job? Are you making any money?

I had a new client who was a stockbroker. He was 29 years old. He and his wife wanted a child, but he had not kept a job for more than a year. They were financially unstable.

We started some coaching with just three questions to try to figure out the source of the problem.

It was an unprofessional situation in the office, particularly with the language his co-workers used. It was inappropriate with a lot of profanities. He knew his own behavior sunk to their level.

One day he was so angry that he broke his hand when he punched a wall. He decided he needed help, and he found me. We had to identify the problems and then find a way for him to pull out of this.

I helped him get hired at E*TRADE. He flourished and was a top performer for six years. Now he has his own firm and is a successful wealth management advisor.

The turning point for him was when we separated out the three components of his problems. Then we could strategize what to do differently. It worked!

I cried the day his son was born, and he sent me a picture.

If you are willing to engage and stay focused, a job search coach can help you with that. I am a career coach, and I help people find work they really want to do. If you would like to talk, you can schedule a free consultation.