Did You Need A Potty Break Between Your Interviews 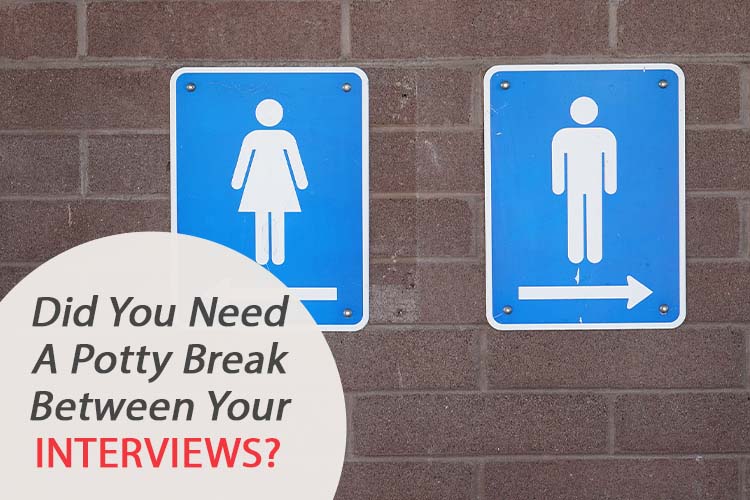 Have you ever needed a bathroom break between interviews?

How has that made a difference in getting or not getting a job?

One time, I did interview coaching for a client who was going onsite to a company to meet four people. It would be stressful because he would have a total of three hours, meeting with each one for 45 minutes.

I always ask that people call me when an interview is done so I know what happened.

His story has always stayed with me. My client was very nervous about the interviews because he would be meeting so many people.

He did call me but said it was one of the worst experiences of his life.

He was ashamed to say that he was so nervous during the interviews that he didn’t ask for a bathroom
break between the four interviews.

You have seen little kids jump up and down and cross their legs. They are trying not to pee in their pants. At one point, he said he was actually nervous that he would pee in his pants. It is hard to think of anything else that could be so distracting. He did not do well in the interviews, which was not surprising. He did not get hired.

The person who was guiding him to each office was thoughtless and set up a breach of common etiquette. It is important to make people comfortable,

I wish this had not happened to him. It was very demoralizing.

I am an interview coach. If you have had a difficult interview of your own, then let’s talk. There is no charge for a consultation. I have been helping people get jobs for more than 20 years. If you would like to talk, go to this link and it will take you to my scheduler.

I hope to hear back from you soon.